The quiet streets of Annai Nagar resound these weeks with the sounds of “Silence, sound, camera, action” as the 6th to 8th standard students take on film production roles and complete the final stage of a six month leadership and film making program which has culminated with each of the children making their own 2 minute film on a societal issue they feel passionate about and a new world they want to create.

This program is a co creation between Thamarai and Yatra Media Arts Foundation. It has been funded through the Auroville 50th fund and has supported children and youth to see themselves as agents of change in their own communities.

This story began in 2012 when Dr. Monica Sharma, former director of leadership and capacity development with the United Nations, started coming to Auroville to offer Stewardship for New Emergence, a leadership and capacity development program that supports participants to get in touch with their innate qualities, what they really care about and how to solve problems with valued based solutions for change. Both the Yatra and Thamarai teams have had continual training with Monica ever since and 6 months ago they shared the program with children who responded enthusiastically to it. The children now embrace what they each stand for and are designing projects such as waste and water management, the development of sports activities, and fostering peace and unity in their village. This was followed by weekly classes on film production, skillfully guided by Srini and the Yatra Arts Foundation team, that started from the history of film, to understanding how films are created and the techniques to script, shoot and record their own films.

The program integrates children of different castes from the three villages Thamarai, Udhayam and Yatra after schools projects operate in. The children have grown in capacity, confidence and skill and now understand that what goes on behind the film screen can be a lengthy and rigorous process. The children have been supported to take the necessary steps for project implementation, to reflect on the experience and to dream about the greatest impact that they can make.

What has changed because of this program ?

The children have learned the skill of film production, values based project design and how to speak up for change. They have grown in confidence and resourcefulness. Caste and gender barriers have been subtly worked on as friendships blossomed. Now the children prepare to present their films in a carnival atmosphere in the village ground in early March so parents and neighbours also become part of this adventure!

Thamarai Educational Projects work towards empowering children, youth and women of villages surrounding Auroville. Through the Portrait Series, we will be featuring the youth that have been working in Thamarai, who’ll narrate their stories and experiences about their life, work and passion towards what they do for their communities. Jagdeshwari is a full-time employee of…

Summary Enabling Futures 2020! We at Thamarai stand for the values of full potential and well being of all. After 13 years of providing educational services in temporary or rented spaces, we are building a learning centre and sports ground on land offered by Auroville to us for village well-being activities. Thamarai is the Tamil…

On March 16th, Thamarai in association with Yatra Arts Media organised a film screening event in Annai Nagar village, where we have one of our after-school centres. Yatra Arts Media for 6 months taught Thamarai after-school children how to film, write scripts and let them explore this field of creativity (Click here to read more…

Covid 19 has had a big impact on mental health and well being all over the world but in particular people from marginalised communities. Here in rural Tamil Nadu, where we in Thamarai Educational Projects work, many people are at home now without work, concerned about the future. Families are together in small spaces where…

Swapnil started his sessions on Mindmapping with Thamarai’s children on January 28th. He conducts his sessions online from Mumbai and simplifies complexity to make learning fun! What is mindmapping? Swapnil : Mind mapping is a visual tool that helps one organise their thoughts, information and ideas relevant to a particular topic. Usually such information and… 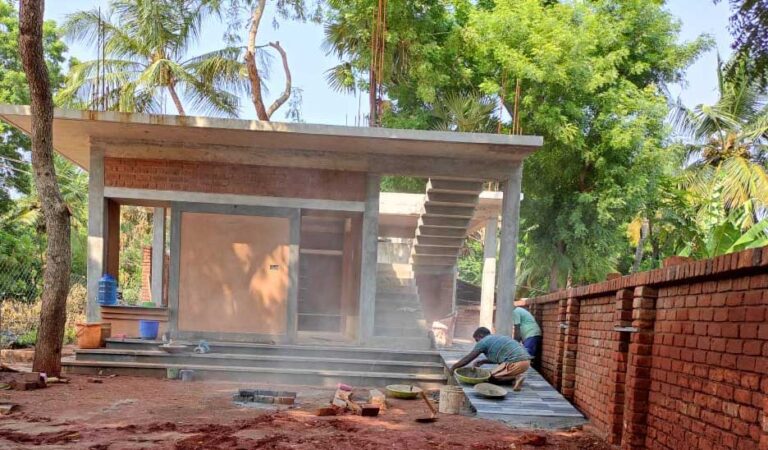 The construction of our new learning centre has been challenged with a stop-start routine since March 28th due to Covid protocols but we are back with a careful, full-powered response. We are putting the finishing touches to the building including the toilet block where we have chosen to both conserve water to build eco san…